There have been some outstanding developments in the US in the past 2 days concerning e-cigarettes and flavors. The FDA has declared an epidemic of e-cigarette use by adolescents. Therefore, the FDA Commissioner announced that it requires “dramatic action to try to curtail this”. What they are looking for right now is to “remove the characterizing flavors from e-cigarette products”. According to information from the Chicago Tribune, the FDA has unpublished data showing a 75% increase in e-cigarette use among high school kids compared to 2017.

Interestingly, the main purpose of this action is to avoid adolescents being addicted to nicotine through e-cigarettes, with some of them transitioning to smoking (based on some studies showing that ever e-cigarette use at baseline is associated with ever smoking at follow up). At the same time, the FDA has acknowledged that this action could hurt some of adult smokers who may need flavors in order to quit and stay away from smoking. Where is the balance between the harm from nicotine addiction and the benefit of a smoker quitting? To answer, I will simply mention the findings of a systematic review paper about the relationship between snus use and cancer. Of note, snus users obtain similar or higher amounts of nicotine daily compared to smokers. The authors reported that in the US in 2005 among men aged 35 years or over, there were a total of 104,737 deaths from seven cancers were attributed to smoking. If none of them smoked but the whole population (including never smokers) were using snus, there would have been 2,081 deaths (instead of 104,737 deaths). To make it more clear, if the whole population was addicted to nicotine through snus, there would be 2,081 cancer deaths attributed to it instead of the 104,737 deaths attributed to smoking. For cardiovascular disease, several studies of snus have shown no elevated risk (examples here, here and here). I will not suggest that there is no risk, but the risk (if any) is minimal. In fact, in two of the studies the authors clearly mentioned that “Nicotine is probably not an important contributor to ischemic heart disease in smokers” and “… nicotine is unlikely to contribute importantly to the pathophysiology of stroke”. This evidence has never been refuted but is simply ignored and hidden from the public. But it is important to think whether the public health community should worry about a dependence associated with very low health risk or an addiction with substantial disease and death burden. 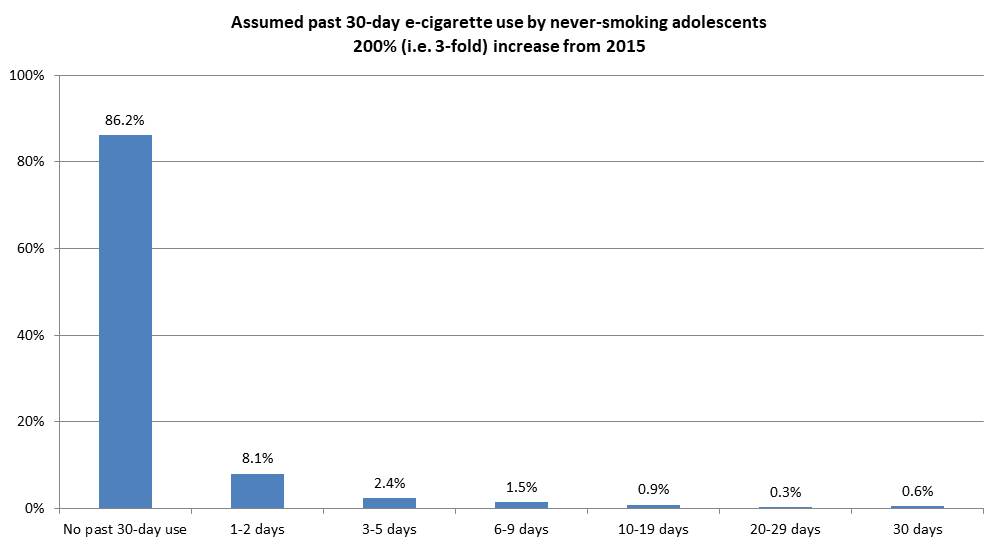 Assuming that this is the case, this is certainly not an epidemic. Even if e-cigarettes are causally linked to subsequent smoking (which has not been proven to be the case, the common liability phenomenon is a much more plausible explanation), the contribution of e-cigarettes to smoking prevalence is minimal. We should not forget that all these years that e-cigarette use (mainly experimentation) was increasing among youth, the smoking prevalence has substantially declined. This is why I mentioned above that the smoking rates should be mentioned when the data are presented.

I think it is a good opportunity to remind everyone of the findings from the largest e-cigarette survey ever performed, examining the patterns of flavored e-cigarette use among US adults. Of course this is a convenient sample and not a population-representative survey, but the number of participants (> 69,000) cannot be ignored.

Figure 6. Choice of the one flavor most often used at the time of survey participation among current smokers, former smokers and never smokers (n = 69233). 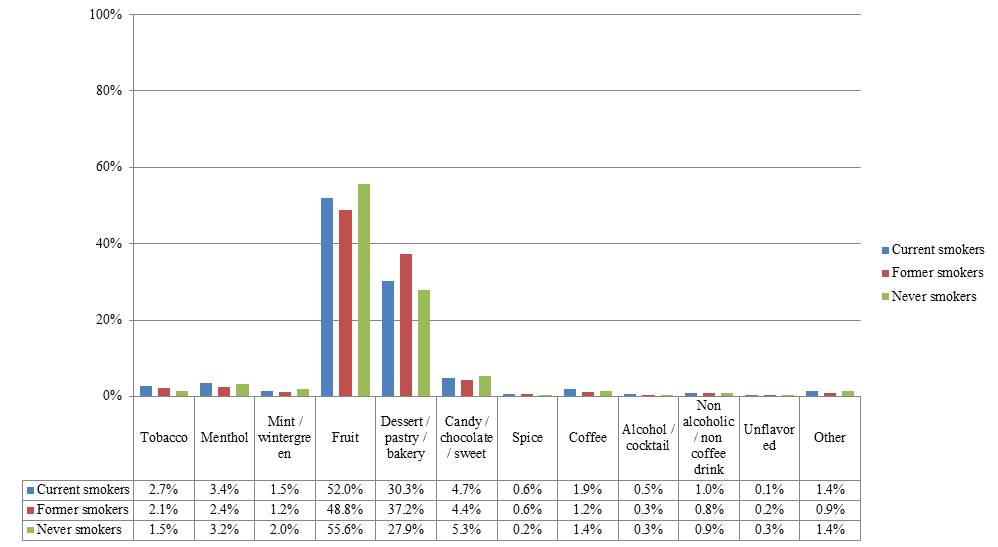 In conclusion, the risk of dependence on nicotine and the risks associated with e-cigarette use cannot be compared to the risks of smoking. Of course adolescents are a sensitive population group that we all care about. But public health is not a science of emotion. It is a science of measurements and calculations. The benefits and adverse effects should be evaluated very carefully, and relevant decisions should be made based on evidence, not emotion. There is a risk of sacrificing lives of smokers in order to prevent a dependence with enormously lower health risks while we still do not know the true extend of this problem (if it exists). Since this obviously is a serious situation, I am eager to see the detailed publication of all the necessary data (including smoking prevalence). I hope this epidemic declaration is not based on ever e-cigarette use or recent experimentation,and i hope there is a good reason for this war when you look at smoking prevalence in adolescents. I will be the first to accept the presence of an epidemic and the need for aggressive measures if this is really the case. But my judgment will be scientific and not emotional or political.

P.S. It is interesting to see the initial reactions to the FDA announcements. Stock prices of tobacco companies skyrocketed, with the highest gains in one day for the last decade. It has been estimated that their stock value was increased by 20 billion USD. We all know what that signals...