A new study was published today in International Journal of Environmental Research and Public Health by our research group. We conducted a risk-assessment analysis of the levels of metals emitted to e-cigarette aerosol as found in 2 studies (by Goniewicz et al. and by Williams et al.). These were the only publications in which metal emissions to the aerosol were measured (some other studies evaluated environmental emissions but were not examined in our analysis because such emissions are by definition minimal and of no health concern to anyone).

We decided to perform this analysis because of gross mis-presentation and mis-interpretation of the findings, especially in the Williams et al. study. While Goniewicz et al. evaluated 13 first-generation devices and found only cadmium, nickel and lead, at levels similar to nicotine inhalers, Williams et al. found more than 10 metals and presented the findings in a table (see below) where the health concerns related to metals exposure were also mentioned. However, our preliminary analysis revealed that those health concerns were associated with huge levels of exposure, usually observed in mining or metal processing industry, but not with the levels found in e-cigarette aerosol. Thus, we decided to prepare a comprehensive and detailed risk assessment analysis.

Part of the table presented in the study by Wiliams et al. 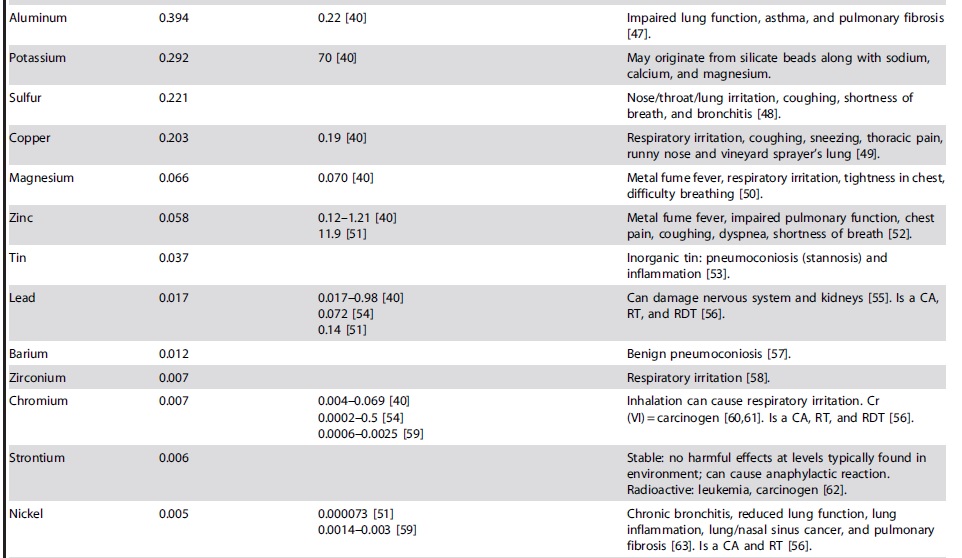 To make our analysis more rigorous, we overestimated the daily use of e-cigarettes by assuming that a vaper takes 1200 puffs per day (which is more than twice the average daily use). We used currently-available regulatory safety limits for this analysis. We started with Permissible Daily Exposure Limits (PDEs) for inhalational medications, as defined by USP. We found that for cadmium, chromium, copper, lead and nickel, the average daily exposure levels from e-cigarette use were 2.6-37.4 times lower compared to acceptable intake from inhalational medications. For manganese we used the Minimal Risk Level (MRL) defined by ATSDR, with exposure from e-cigarette use being 325 times lower than the MRL. For aluminum, barium, iron, tin, titanium, zinc and zirconium we used the Recommended Exposure Limits (RELs) defined by NIOSH. Exposure from e-cigarette use was 665-77,500 times lower compared to RELs.

It should be mentioned that the studies analysed evaluated first-generation atomizers. It is important to expand the research on new-generation devices. Recent developments involve the use of stainless steel and pyrex glass, which could theoretically result in lower metal emissions to the aerosol. Unfortunately, no such study has been published yet, and the companies producing these atomizers have not invested on research to determine whether these new products further reduce metal emissions. Another important thing was that large differences in metal emissions were observed between different devices. This means that there is significant room for improvement.

The results of our risk assessment analysis clearly show that exposure to metals from e-cigarettes is not expected to be of significant health concern for smokers who switch to e-cigarette use. However, there is the need to improve the quality of the products, to further reduce unnecessary exposure. Finally, there is no reason for a non-smoker to be exposed to any levels of metals, thus, we do not recommend use of e-cigarettes by never smokers.